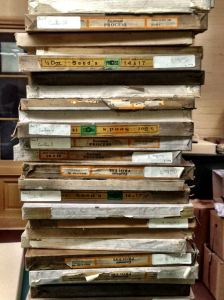 Getting to work with photographs is always exciting for me. Even if the subject isn’t particularly interesting. I spent several months working in the archives at the Keweenaw National Historical Park. I processed a mining company collection containing a lot of large format glass plate negatives. Glass plate negatives describe themselves pretty well, but if you’re unfamiliar, they were film before we had film. Sheets of glass were treated with emulsion and placed into cameras one at a time, exposed to create an image, then processed one at a time to reveal and fix that image. That was your negative, long before rolls of 35mm came around. These particular glass plates were huge. And they were 100+ years old. And they depicted mine maps of which we had paper copies. Maps can be cool, but mine maps can be quite mundane. Once you’ve seen one, unless you’re looking for something specific, you’ve seen them all.

Still, working with the glass plate negatives was fun. I gained experience working with an old format you don’t see too often, especially in that size. And there were little things that made them interesting. I got a glimpse into the photographer’s process. On the plates that weren’t cropped around the border of the map, you could see that in order to get the image, the photographer hung it on a wall in a studio. Sometimes, the studio lighting equipment stood visible in the frame. The company actually had a photography department whose job it was to make these. I could imagine working in a studio over one hundred years ago, setting up shots, processing the negatives, and making prints from these huge plates. Even if the subject matter is sometimes less than thrilling, it’s worth it to do what you love.